Simultaneously to my final thesis I implemented an application to visualize dynamic weighted and directed graphs with hierarchical organization of nodes at the VISUS (University of Stuttgart Visualisation Research Centre).

Here is an example of such a visualization for a soccer dataset. It is showing the number of goals countries playing against each other scored: 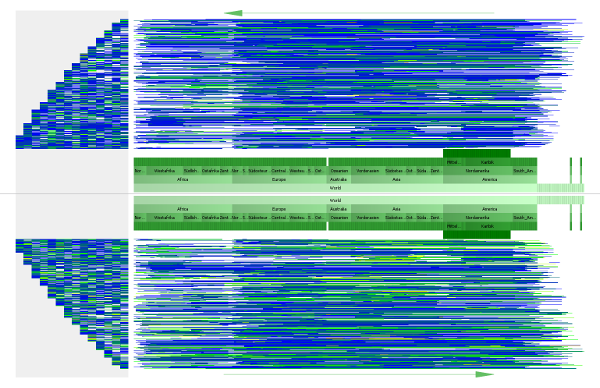 This visualization technique contains a hierarchy in the middle of the view which contains nodes of the graph; above and below, directed edges connecting these nodes are visible. Lines above the hierarchy represent directed edges from the node below the right end of a line to the one below the left end - this means that these edges run from right to left. Below the hierarchy, edges from left to right are visible respectively. On the left side of the visualization there is a time line showing color coded weights for edges placed at the same height. It is possible to select graphs (a time period) for coloring the edges in the right part of the visualization. The edges can visualize for example the minimum, the maximum or the average of weights of all selected graphs. Using tooltips and selection of different elements in the visualization more details with regard to the dataset can be analyzed.

The program is implemented in C++ using Qt for the user interface; the Qt Graphics View Framework is used for the graphic and interactive elements of the visualization.

Visualizations I created with my application are used in the publication Edge-Stacked Timelines for Visualizing Dynamic Weighted Digraph. In there, a more detailed description of the visualization technique can be found.